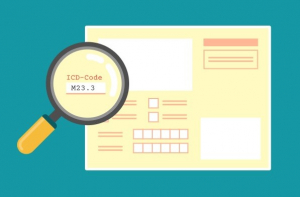 The ICD code is a globally recognized system with which medical diagnoses are named uniformly. ICD stands for “International Statistical Classification of Diseases and Related Health Problems”, in German and simplified: “International Classification of Diseases”. The ICD-10 version is currently in effect. In January 2022, the new version ICD-11 will come into effect with a 5-year transition period.

Doctors indicate ICD codes on certificates of incapacity for work and other medical documents in order to name diagnoses uniformly. The official ICD diagnosis code is written in a technical language that is difficult for non-medical professionals to understand.

What do the letters and numbers stand for?

The ICD code is structured according to a fixed structure in which each position has its meaning. The letter at the beginning and the following two digits indicate the main category of a diagnosis, for example J45 stands for “Status asthmaticus”, ie asthma. The diagnosis can be named more precisely with additional digits after a point: J45.0 refers to “predominantly allergic bronchial asthma” and J45.1 to “non-allergic bronchial asthma”.

Additional identifiers can be specified after the ICD code. These letters provide further information:
The additional indicators R (right), L (left) and B (both sides) stand for the affected side of the body. In the event of a cruciate ligament rupture, for example, doctors can use it to indicate whether the left, right or both knees are affected.

The additional indicators A (excluded diagnosis), G (confirmed diagnosis), V (suspected diagnosis) and Z (status after the diagnosis) stand for the diagnostic reliability. Doctors can use it to indicate, for example, whether a cruciate ligament rupture has been proven or – on the contrary – has been excluded.

What is the diagnostic encryption used for?
With the ICD code (also: ICD diagnosis key), every disease can be assigned uniformly worldwide. In Germany, doctors are obliged to encode their diagnoses in accordance with ICD-10-GM. The coding according to ICD-10-GM is used to document incapacity for work and for billing purposes. The “GM” stands for “German Modification”: This is a version of the internationally valid version ICD-10-WHO that has been adapted to the requirements of the German health care system. It is closely based on the version of the WHO (World Health Organization) in order to enable international comparisons and studies.

What else does Florence Nightingale have to say to us today?

Dementia: What is the right approach?
Scroll to top